The Music of Star Wars And John Williams

This is a listing of music in the Star Wars Galaxy that goes beyond the Saga.  These are The TV series, The New Anthology Film series and Exanded Universe.  The following is a list of those that include music composed for the media.

Kevin Kiner continued to compose the music for the Animated Star Wars series with the Rebels.  New leitmotifs have been composed for all new chracters.  So far the first two seasons have been released in two seperate albums.
​

Many of the videos games for Star Wars includied a soundtrack recorded by a full orchestra and choir.  Some of the music were avalible as a seperate soundtrack and some were not.  John Williams music has been included along with new letimotifs for each of these games.  This is a list of the video games with year and composer for each game. 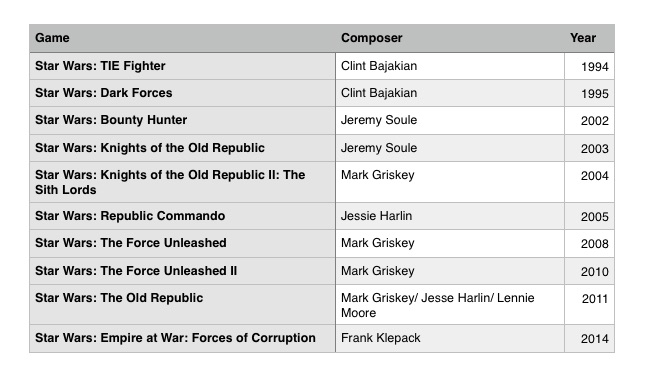 Domenico Monardo who went by the name Meco created remix disco versons of the music of Star Wars during the release of the Original Trilogy.  The Star Wars/ Cantina Band remix was a very popular single that was played in Discotechs (Dance Clubs of the 1970s).  He then created more rexmixes for The Empire Strikes Back and Return of the Jedi.
​
Along with these remixes Meco also composed and recorded a Star Wars Christmas album with the lead singer being Anthony Daniels as C-3PO.  One of the songs in the Christmas album also includes the first recording of Jon Bon Jovi as his cousin's studio was used for the session and he was available to sing one of the tracks.

Other Remixes and Singles

Over the years there has been singles taken from the actual soundtracks but also more recent a few more remixes.  Here lists these that have either been sold or are now currently sold.
Figrin O'an and the Modal Nodes- This was given as the name of the band from the Original Star Wars at the time of the Special Edition.  There were two numbers they played in the film and for the first time both were available on the Special Edition CDs along with the entire underscore.  The songs are simply called Cantina Band No.1 and Cantina Band No.2.  They were also relased in this CD single at the time of the Speical Editions in 1997.

The Max Rebo Band- Originally the song was Lepti Nek in the Return of the Jedi, however a new song was replaced in the Speical Edition titled Jedi Rock.  The music was released in the Speical Edition CD along with the CD single.   Like the Cantina Band, the Max Rebo band were given a back story along with new added members.  (They also appeared in the Clone War TV Series and Sy Snootls had a relationship with the Huts).