The Music of Star Wars And John Williams

Source music is the music in a film that is heard by the characters of the story rather then the underscore, which is the mood that fits the scene and heard by the audience. There are different levels of source music, however here I will be talking about the various source music found in the six Star Wars films.
Episode I- The Phanom Menace
Augie’s Municipal Band: Played at the end of the film. It was played during the parade victory celebration among the humans and the Gungans on Naboo.
Tatooine Street Music: Several eastern sounding music was written by John Williams as a set for the street music of the city on Tatooine.

Episode II- Attack of the Clones
Dex’s Diner: The scene where Obi-wan visits Dex at his diner. There is music playing in the background. This is source music that is either being performed or in the jukebox of the diner.
Arena Percussion: The percussion that is played in the area in the final major scene just before Anakin, Padme, and Obi-wan were going to be executed.

Episode III- Revenge of the Sith
No Source Music

Episode IV- A New Hope
Cantina Band NO.1 & No.2: There are two numbers that the Cantina Band plays. The first one is the one that is the most popular and is played when Luke and Ben first enter the Cantina. The second number is played while they are having the discussion with Han Solo at the booth.
Ceremony: This is a bit of a fooling to the audience. It is not source music but the music that is played in the underscore sounds like source music. One would think that music would be played during a ceremony, however this scene does not have any musicians nor does it sound like there is music. It does make a fit as source music and  thought I would add it to the list.
​
Episode V- The Empire Strikes Back
The best film in the entire series and NO Source music at all!!!.. Why?
Episode VI- Return of the Jedi
Jabba’s Baroque Recital: This is the music that the Max Rebo Band is playing when C-3PO and R2-D2 first see Jabba The Hutt. It was available in the CD recording after the special editions were released.
Lepti Nek: This is the song that Sy Snootles and the Rebo Band perform during the scene where Jabba throws his slave girl to the Rancor Monster.
Jedi Rocks: This is the replacement of Lepti Nek in the Special Edition. Personally I felt that the original song was better suited for this scene.
Max Rebo Band Jams: The Max Rebo Band Jams a couple of times during scenes in the palace and on the Sail Barge.
Ewok Celebration: This is the victory song at the end of Return of the Jedi. It is written in a primitive style to fit the sounds of the Ewoks lifestyle.
Victory Celebration: This is the replacement source music at the end of Return of the Jedi. The primitive song was replaced with this song as it fits the new scenes showing other planets in celebration of the end of the war.
Episode VII- The Force Awakens— Coming Soon

Musicians in the Star Wars Universe

The fictional world of Star Wars has several musical groups as seen in the films, comics, novels, and video games.  No only has main and supporting characters had developing background stories, but so has the musicians.  Some of these are drawn from The Expanded Universe which is now considered to be Legend and no longer canon.  However, the Star Wars website still has this information and can still be considered to be important.  Each musician has been given a name and an instrument they play.  Here lists three of the major bands in the films with their instruments and the film they appear. 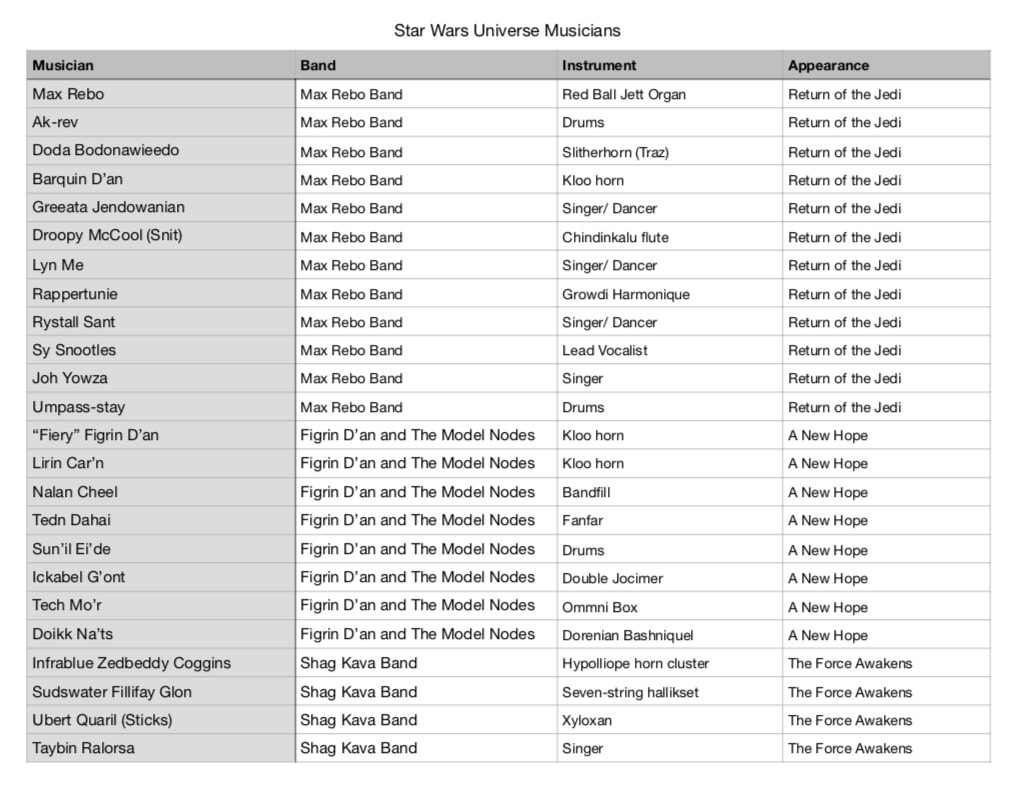